Model of the week: Vlada Roslyakova

Vlada Roslyakova is a russian model, she's one of my favorite and in my eyes her pictures can do no wrong. She's also considered to be one of the models to have a baby doll-esque face.

She has worked for Nina Ricci, Moschino Cheap & Chic, Vera Wang Bridal, Burberry Blue Label, Hermès, Miss Sixty, MaxMara, Christian Lacroix, Dolce & Gabbana, Jill Stuart, DKNY, Daks Japan, Karl Lagerfeld, and Lacoste.
It's usual to see her in Fashion Week runways though some time ago she was one of the models that could have missed Milan's Fashion Week due to being underweight, however she stated that she was naturally thin and that she could eat a lot and not gain a pound, whether that's true or not it's for you to discuss.

She's known to be a lovely person and a goof backstage, as well as her trademark walk on the runway.


Curious fact: Her real name's Elena but she changed it to Vlada so she wouldn't be confused with another model. 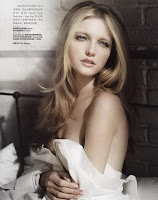